When learning about the genetics of a condition, it may be difficult to understand everything. There are so many unfamiliar terms -- DNA, genes, the genome, etc. The cell and its important contents are a good place to start when trying to better understand basic genetics terms and key ideas.

Our body is made up of trillions of cells. Within each cell are the instructions needed for the body to function. Those instructions are in the form of the chemical DNA (deoxyribonucleic acid). DNA is the hereditary material located within our cells. Each cell in our body has an almost identical copy of our DNA in it. DNA is made up of units (nucleotides) called adenine (A), thymine (T), guanine (G), and cytosine (C). 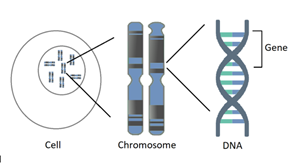 Genes are sections of our DNA that the body reads and interprets like instructions. They are the genetic code and are the instructions for making proteins that have many critical jobs in the body. 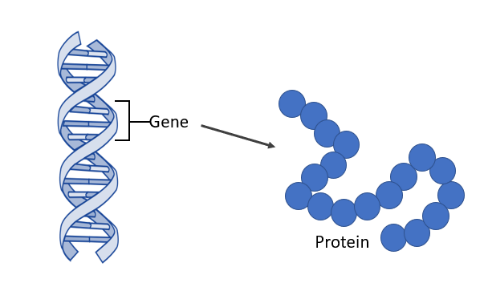 Each gene has a specific function; some genes determine how we look, or regulate how our body digests food, while others protect our body from developing disease. Genes occur in pairs. We have two copies of every gene— one copy is inherited from our mother and the other is inherited from our father. The entire set of genetic information found in each human is called the genome and is thought to contain about 20,000 to 25,000 genes. 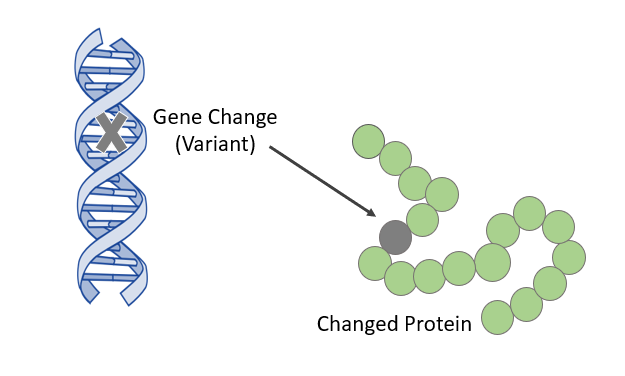 If there is a change in the DNA sequence of a gene, it may cause a change in the instructions. These changes are called mutations or variants and can alter the function of the gene and its protein.

Variants can occur anywhere within a gene, and there are many different variants that can be found within each gene.

Some variants are clearly associated with disease, while others are not.

❌: Variants known to be associated with disease are called pathogenic or likely pathogenic. If a variant is harmful, it will result in an altered protein that is unable perform its normal job or may cause a reduced amount of protein which can lead to disease.

✅: Variants not known to be associated with disease are called benign or likely benign. These either have no effect on the protein, or don’t alter it enough to be harmful.

[ ? ]: There are also variants of unknown significance, meaning we are not sure if they cause disease or not.

In addition, there are many changes or variants in DNA that are common in the population and are simply individual differences. These are sometimes referred to as polymorphisms or single nucleotide polymorphisms [SNPs].

Genes are inherited from parents and passed on to children. If a person has a change or variant in a gene, then they have a chance to pass that variant on to their children as well.

For more information about genetic concepts, you can visit: